If you’ve been following my blog for a while, or if you know me personally, you’ll know I have an obsession with unicorns, so much so that I actually have a unicorn tattooed on my arm. So, when I saw the latest eyeliner trend started by @glowawaymeg on instagram, I just had to give it a go, but by putting my own magical twist on it.

I have to admit, this was not as easy as I originally thought or planned, I had to redo the unicorn horn so many times, but alas, I finally perfected it and I’m so happy with how it turned out. I’ll do my best to explain how I did it, but I apologise in advance if it sounds confusing.

The list of products I used are as follows: 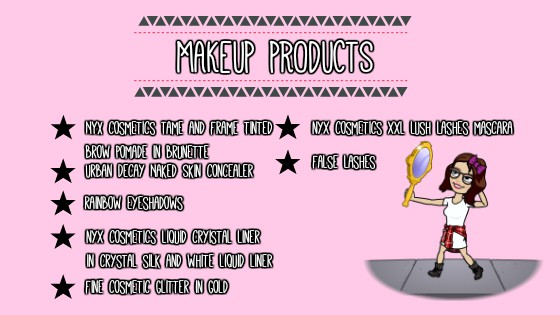 So in order to create this, (after I’d done my brows) I took a small angled brush and marked out where I wanted my cut crease to be with each colour of the rainbow. Then, I took a small packing brush and went along with each colour to add a bit more and blend it out to how I desired. I cleaned up the crease with concealer and then edged the cut crease in gold liquid liner.

Next, I drew the white wing. Then I took my gold liquid liner and used that to fill in the rest of where my eyeliner would usually be before pressing gold glitter into it before it dried. In order to make the wing look like a horn, I took a dotting tool and dipped it in the white liner and I added dots each side of the white to round it out, gradually bringing the dots closer to the centre as I reached the tip so that it would sort of taper. I then took some grey eyeshadow and created the ridges of the horn so that it look like a spiral.

For the helix part, I took my gold liner and created S shapes so that it looked like the gold glitter was wrapping around the horn.

On my lower lash line I copied the rainbow from the cut crease, and then in my inner corner I made a star out of white liquid liner. After some mascara and lashes, I was finally done.

Hopefully you can sort of make sense of this and I hope you like this as much as I do.