I’ve done it! Yesterday was the final day of my 30 Day Shred so I am completely done and I can’t believe it. It feels like its taken forever but now that I’ve seen the results, I know it has absolutely been worth it. It has been difficult at times and there have been a few moments when I’ve considered just giving in, but I’m so glad I didn’t now. I now have even more motivation to keep up this healthy lifestyle and continue to get the results I’ve been aiming for for so long.

As you all know, my aim for this was primarily to tone up. Though I’m not totally at my goal yet, I’ve got a great starting point to build on. My arms are leaner, my legs are stronger and my core is definitely toning. The workout I was doing did get a bit tedious even though I was doing it cyclicly, but now I know what sort of exercises to be doing at the gym and I can also build on those with new exercises. I plan to try and do a bit of ab work everyday just so I can keep my core strong and hopefully I’ll be able to get some strength and cardio work in around my new work schedule.

As for the teatox, the results have been more than I could possibly have hoped for. My bloating went down with the first week, my energy increased and my body on a whole just felt so much cleaner. I’ve slimmed down too which I wasn’t expecting. As mentioned in a previous post, my skin is also clearer. I wouldn’t have thought that so much goodness could come from a tiny teabag and I can quite easily say I’m already missing drinking them since I finished on Friday.

Whilst on the teatox, clean eating is also recommended. This was the part I was most worried about but if anything, its the part that’s been the easiest. I haven’t really ad to sacrifice any of the foods I like to eat. I simply switched white for brown in terms of bread and pasta, normal potatoes became sweet potatoes and I cut out foods that had artificial sugars and sweeteners. I’ve now found I enjoy eating all of this clean food so much more because my body feels so good afterwards. I never feel bloated or lethargic. Controlling my portion size means my digestive system isn’t working overtime and I’m never too full, just full enough to keep me going until my next meal. Now that the teatox is over, I decided to treat myself to an oreo, and now my tolerance for sugar has gone completely. I know find sweets and chocolate too sweet and can’t stomach more than one mouthful. I haven’t craved those foods either. I just don’t want to eat them anymore which is great. I’m more than happy to continue on with the new, healthier diet I have now.

So after all of that, here are my results. On the top row are my before pictures and on the bottom, pictures taken just this morning. The difference is insane. 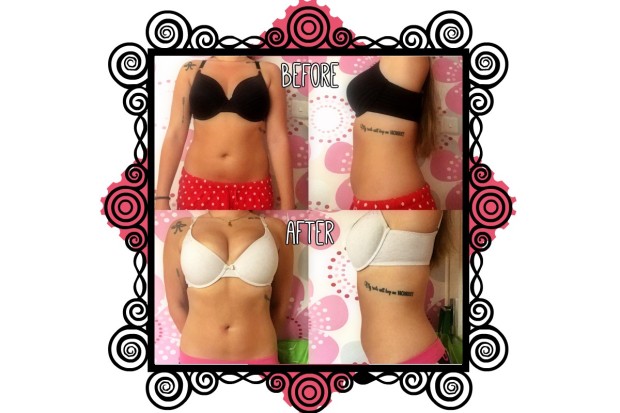 To anyone considering this, I say do it! You’ll feel better for it and its a great starting platform. I’ll leave links below to buy the teatox and if anyone else has done this let me know how you found it too.

Thank you for joining me on this journey.